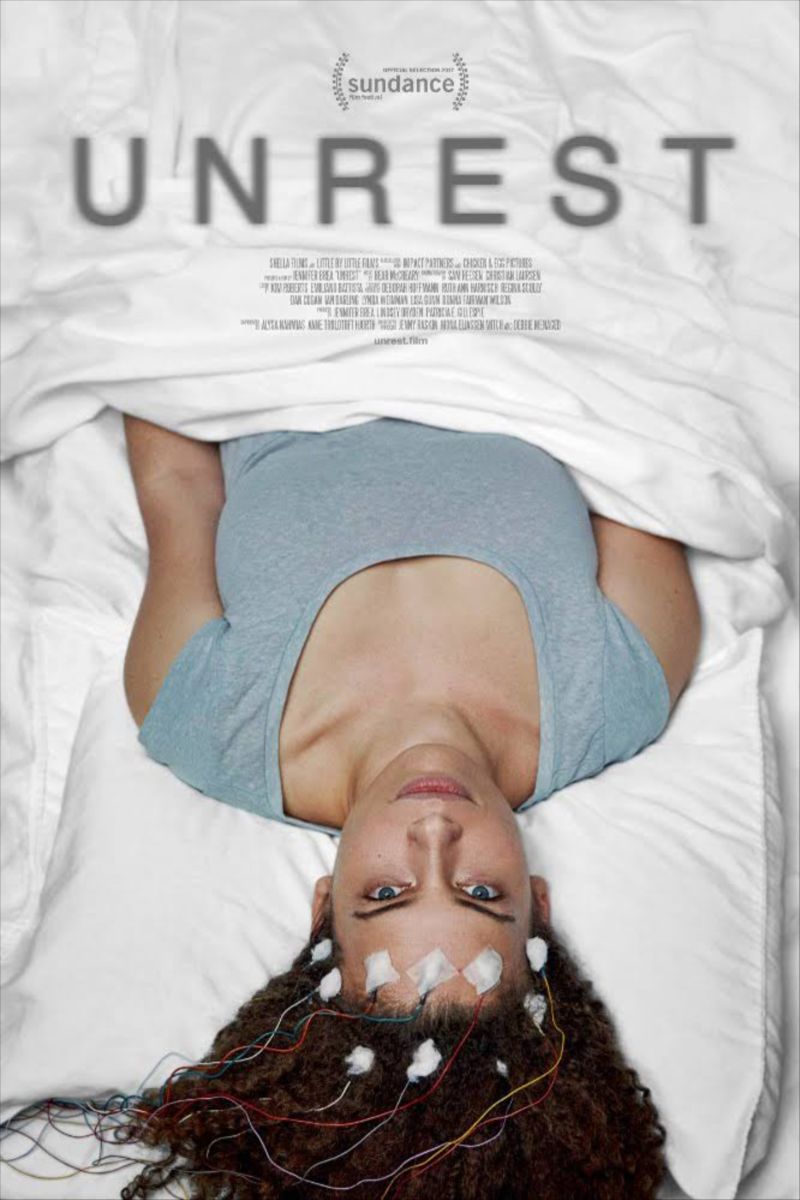 This wasn’t the thing I thought I’d be blogging about today, but nevertheless, the thing I started writing isn’t quite working, so let’s go with another review.

Unrest is a 2017 documentary about chronic fatigue syndrome (CFS)/Myalgic Encephalomyelitis (ME) by Harvard PhD candidate Jennifer Brea, who also gave a TED talk about her condition in 2016 from her wheelchair (16:32 min).

She made the documentary for several reasons: it records her story and her struggle with the disease—the medical appointments; the good days when she is able to walk—when she appears “normal”; the bad days when she can’t do anything except lie there; the days when she has to drag herself along the floor, crying in pain, in order to get herself into bed; the things that she grieves, because the disease has robbed her of so much; the impact of her condition on her relationships (particular her relationship with her husband, Omar Wasow, a politics professor at Princeton); and her own journey in trying to understand the disease.

But it’s also partly a chronicle of the stories and the range of experience of other CFS-sufferers and their carers around the world, whom Brea connects with via video chat. There’s Jessica in England who has been severely unwell for eight years; Leeray, a middle age mother, whose husband did not believe there was anything wrong with her and who left her because of it; Casie, Leeray’s daughter, who was diagnosed with the same condition; Ketty and Per in Denmark, parents of CFS patient Karina, who was taken from them because Denmark does not acknowledge CFS as a medical disease; and Ron Davis, Professor of Biochemistry and Genetics, Director of the Stanford Genome Technology Centre at Stanford University, and father of CFS-sufferer Whitney, who has not talked in over a year and who lives in almost complete darkness in his room. Their stories amplify and highlight Brea’s, giving voice to the many who suffer from this disease, who have all but disappeared from view in everyday society.

In addition, through their stories, the documentary touches on different issues affecting CFS sufferers, such as not being believed; the social stigma of people thinking you’re just making up your symptoms; the blindness of the medical community, most of whom have little idea of what the disease is, let alone how to treat it; historical misconceptions of CFS/ME, and how it is often dismissed because the majority of those affected are women; different treatments that patients try in order to try to alleviate their symptoms (with varying results); and the struggle of those in the field of medical research to attract support and funding for their work. As Ron Davis explains,

Chronic Fatigue Syndrome is the lowest funded of any major disease by a lot. Many of the people that are at the NIH [National Institute of Health] and have in the past not believed it’s real. So why would you fund something that’s not real?

This sort of gaslighting highlights the need for Brea’s documentary—as an engine of activism, raising awareness among the general public (see also the Millions Missing global campaign). CFS/ME is bad enough on its own, but compounded with the judgement and prejudice of an ableist society, it can be devastating for those affected. You can see Brea herself struggling with the hopes and expectations that society has placed on her: in one heartbreaking scene, she confesses,

It was like I had died, but was forced to watch as the world moved on … If I completely disappear and I’m in this bed, then it’s like I don’t even exist or that I never existed. And then what was the point of it all—of being born in the first place? You know and honestly there are a lot of days when I just feel like I’m doing a good job by just holding it together and not killing myself. And it’s not—I really don’t want to die—like, I really don’t want to die—but at a certain point, it’s hard to call this living, and I think the grief of all those things I might not do or see or have … yeah, so it’s sad.

I couldn’t help thinking that if the world was less focused on markers of life success and achievement and more understanding and compassionate about the circumstances of those who don’t fit a certain mould, Brea and others like her would be having a slightly easier time of things. It is tragic—and also, I think, a damning judgement on a society that has failed to listen to them—that so many CFS patients end their suffering by taking their own lives. There is so much more that we ought to be doing to relieve their burdens.

If you, like me, know someone or multiple someones with CFS/ME-type symptoms (and there are so many more now in the wake of COVID, which leads me to hope that the disease will receiving proper funding and attention soon), please watch this documentary. If you don’t know anyone with this disease and understand nothing about it, then you should definitely watch it. It’s upsetting and distressing at places, and it contains no easy answers, which many will find frustrating. But it is very much worth it if only to help you understand the suffering of many and the miracle of their resilience in the face of such crushing odds.