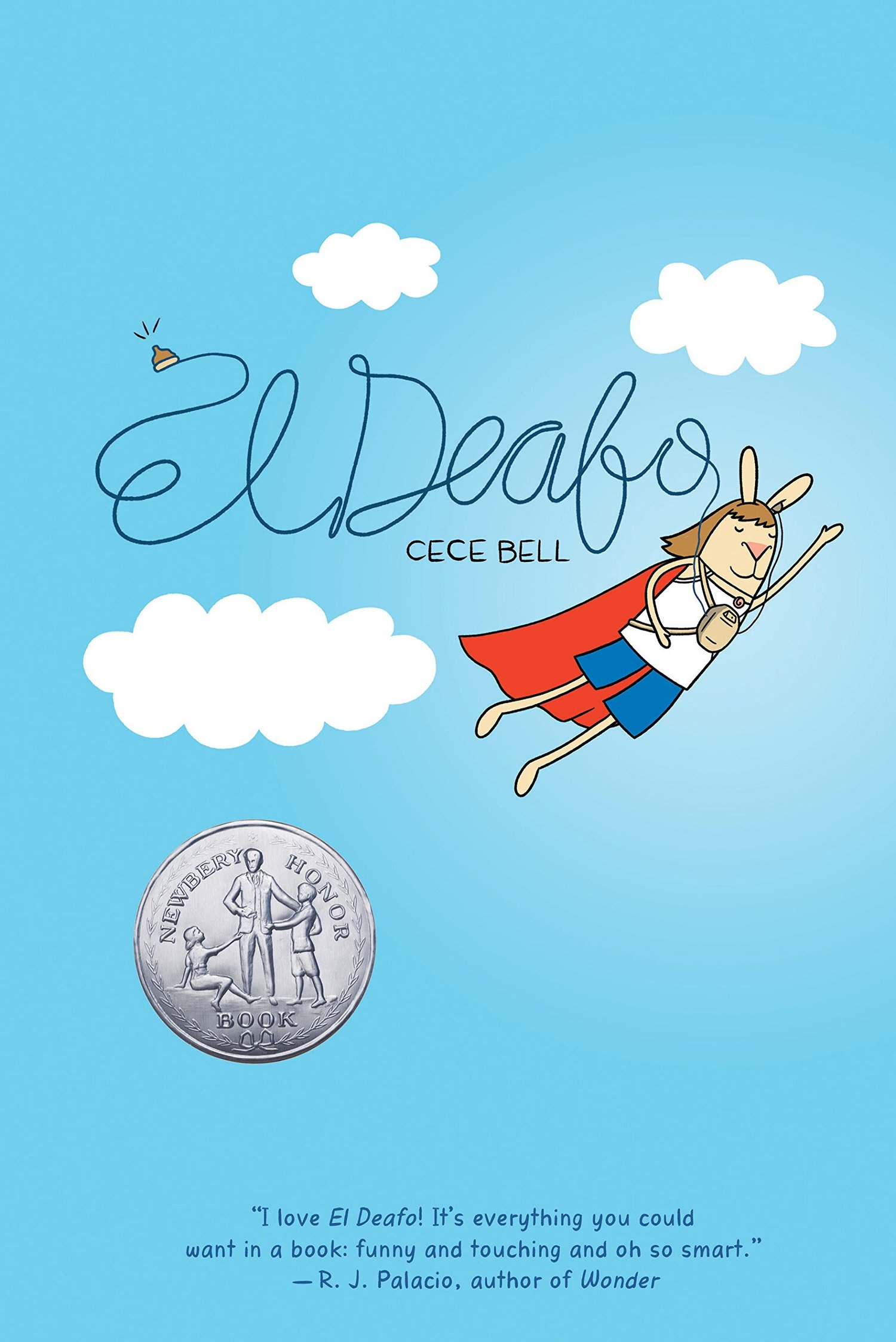 Despite it winning a Newbery Honor and an Eisner Award in 2015, I hadn’t heard of this book. I saw it in the Scholastic Book Club catalogue and decided to get it because it sounded interesting (and Scholastic do a good job of selling books through Book Club at a nice discount).

I was glad I did.

El Deafo is the semi-autobiographical story of Cece Bell who, at age four, contracts meningitis and loses most of her hearing. The story follows Cece through the next five years as she tries to learn to live in a world of hearing-abled people who don’t necessarily understand her disability, and how it affects her life and her relationships.

The impact of deafness on Cece’s relationships is a major theme throughout the story—particularly with regards to her friendships. Cece’s longing for true companions is highlighted by her extreme loneliness: in certain panels, she’s visually depicted within bubbles. Friendship, which is always a rich subject for middle grade fiction, takes on other interesting shades when the children who try to befriend Cece also find themselves contending with Cece’s deafness. There are those for whom it is an issue, there are those for whom it is not an issue, and there are those who try to over-compensate for it. Mix that with friends who are overbearing, bossy and boundary transgressors; friends who are well-meaning but irritating; and friends who are terrific but human and flawed, and you get a sense of the rocky landscape that Cece must traverse in order to connect with her peers. The fruit of these vignettes is a very helpful guide to what helps and what doesn’t when relating to others who are hearing impaired.

Certainly one of the things I loved about Cece was her resilience: early on with the help of her phonic ear, which she has to use for school, she reframes her deafness, imagining herself as a superhero with super hearing and calling herself “El Deafo”. Whole scenes play out in Cece’s imagination, where she pictures herself saying things and dealing with others in a way she doesn’t quite feel confident enough to do in real life. The climax of the story is a wonderful culmination of Cece’s growth to self-acceptance, as well as the acceptance of the kids around her, and I came away from the story wanting everyone in the world to read it.

Final thing: there were a number of things about the artwork of this graphic novel that I really loved. The characters are all depicted as rabbits, which is quite clever considering how rabbits are known for having big ears. (I also wondered if it was a nod to Art Spiegelman’s Maus.) I loved how the effects of Cece’s deafness was depicted in empty speech balloons, faint lettering, and text that looked like a foreign language until you did the hard work of trying sound out the words phonetically and guessed what the speaker was trying to say. I also loved the diagrams showing how certain words look the same in lip-reading. All of these things helped put the reader in Cece’s shoes and so that you really feel what it’s like to be her and live her experience. As Harvey Pekar once said, “Comics are words and pictures. You can do anything with words and pictures”, and yet I never expected that a comic—which is, essentially, a silent medium—could do that in a story about deafness and hearing.

Obviously I still have a lot to learn.