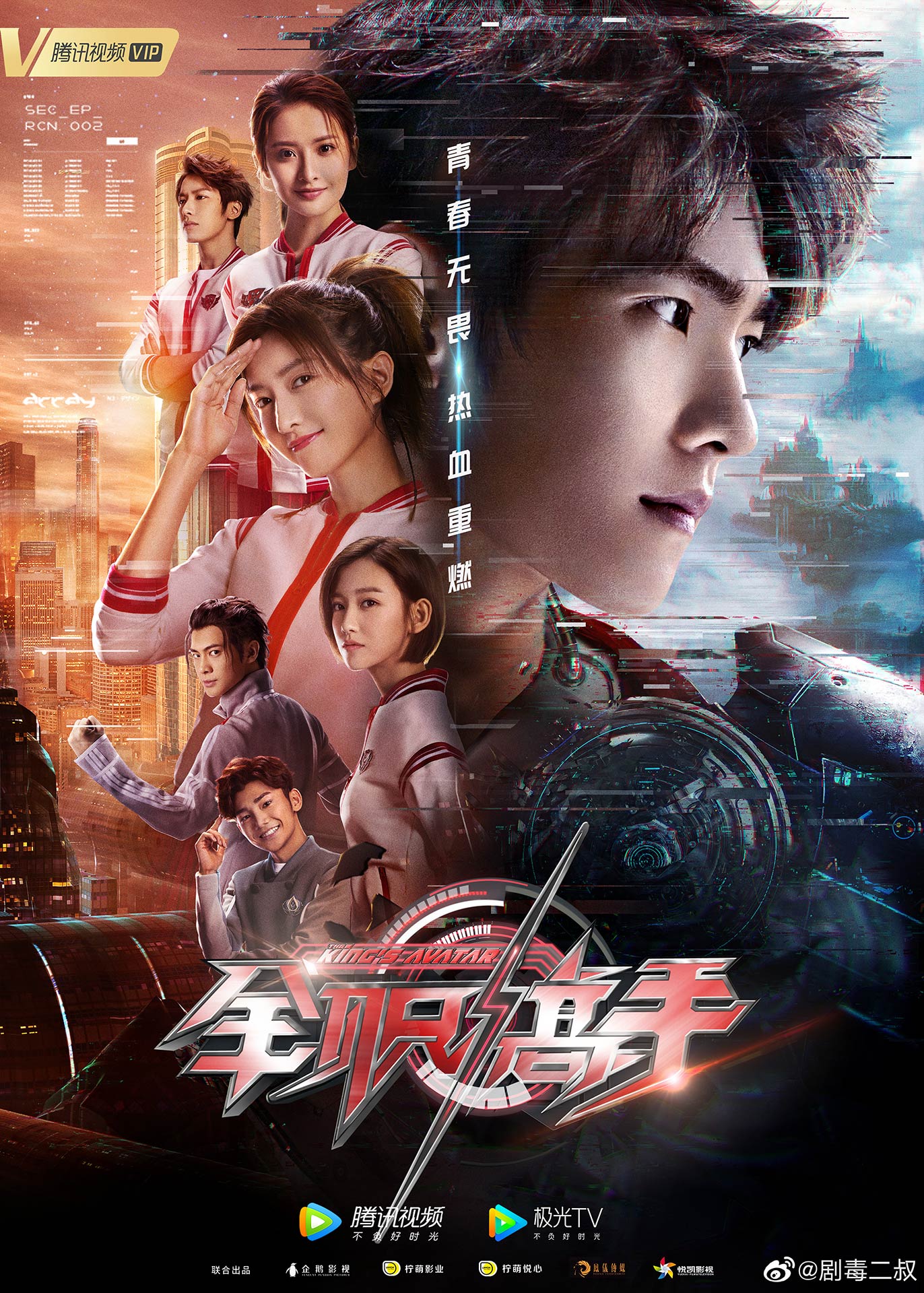 (I’m reposting a review I put on my personal FB profile because this show deserves more eyes, and if you’re looking for something fun and engrossing to watch while you’re in lockdown, I highly recommend this one.)

I’ve been meaning to write about this one for months. Once again, this was a Netflix recommendation: I don’t think I would have started watching it by myself. I mean, it’s about esports. I don’t even like sport sport; why would I want to watch something about esports?!!

Well, I was wrong about that!

The King’s Avatar (based on the web novel by Hu Dielan) is about esport athletes who play a Massive Multiplayer Online Role Playing Game (MMORPG) called Glory. Think World of Warcraft but sort of more medieval, with lots of armour and swords, but also gatling guns, ninjas and magic. (Yeah, that combination doesn’t make sense to me either.) (Also, it’s not a real game. Yet.) Ye Qiu (Yang Yang who was also the male lead in Love O2O), who plays with the avatar One Autumn Leaf, is the number #1 player in the league and captain of the team Excellent Era. Despite a successful season in which Excellent Era placed first in the league, Ye Qiu is forcibly retired by the team’s manager who wants to bring on new blood. However, instead of staying on as a consultant (the manager’s preference), Ye Qiu chooses to break his contract and walk away, handing over One Autumn Leaf to the new captain (Sun Xiang) and starting again.

As no one other than his team members and a few others in the league actually know what Ye Qiu looks like, because he always wears a mask in public, Ye Qiu is able to go wherever he pleases. In need of a new job, Ye Qiu goes to the internet café across the street from Excellent Era’s headquarters where he meets the café’s owner, Chen Guo, another Glory player and massive One Autumn Leaf fan. She is in need of a network manager and hires Ye Qiu as soon as she discovers how good he is at playing Glory (but not realising that he is actually her idol). She also provides him with room and board, and computer/internet access that allows Ye Qiu to start again in Glory—this time, on a brand new server and using a new avatar who he names “Lord Grim” (and his relative anonymity does result in some very amusing scenes with those who don’t know any better). However, instead of choosing a particular role (in Glory, you can be a Launcher or a Battlemage or a Cleric or a Warlock, etc.), he plays as an unspecialised, which means that he can deploy a number of different skills across all the categories.

He is also developing a new weapon that was designed by a childhood friend and fellow Glory player Su Muqiu (who died, though we never really learn the circumstances behind his death). I’m not sure if the translation really does it justice: the weapo is called the “Myriad Manifestation Umbrella” and it can be wielded as a spear, a sword, a gun, a shield, and so on and so forth.

Lord Grim starts breaking records and making waves, drawing the attention of other players—both amateur and professional. And slowly over time, Ye Qiu starts to build himself a new team …

I liked this series far more than I was expecting to. The script really leaned into many of the tropes of sports movies (a genre that I sometimes enjoy despite the sports. I like Pitch Perfect, which is essentially a sports movie): there’s the rules of the game, training sessions, assembling the team, conflict between the members, different team members learning to work together, progress, advancing through levels, setbacks, stakes … I could go on, but I think you get the picture.

Most significantly (for an Asian drama), there is NO ROMANCE. None. Zilch. You might expect there to be something going on between Ye Qiu and Chen Guo, or even Ye Qiu and Su Muqiu’s sister, Su Mucheng (Launcher for Excellent Era). But no: the script steers well clear of that. Everyone is just friends and that’s just so refreshing.

Act 1 mostly focuses on Ye Qiu re-establishing himself again, and one of the delights of the series is seeing how good he is at Glory compared to how hopeless he is in real life. I really liked seeing Yang Yang in this role, rather than as Xiao Nai in Love O2O: he gets to do a lot more and his character is a lot more likeable. His motives are never in doubt: he’s not playing Glory for fame or money or accolades; he’s just a mad gamer head who loves the game and loves playing with other people. Furthermore, he’s quite other-person-centred: because he loves playing with other people, he’s a natural at identifying and nurturing talent. As he draws out other potential team members—such as Chen Guo’s best friend Tang Rou, warehouse manager Bao Rongxing (who plays under the moniker “Steamed Bun Invasion” [“Bao” means “bread” in Chinese]) and even the insecure Qiao Yifan, rookie over at Team Tiny Herb, he acts as a mentor figure, encouraging and instilling his protegés with confidence even as he trains them to play better and play better with others. This is a big contrast to other characters—like Sun Xiang, Excellent Era’s new captain, who is young, arrogant and not much of a team player or mentor figure, and even Xiao Shiqin, captain of Team Thunderbolt, who demonstrates his considerable talent for strategy.

The second act could have been the soggy middle where the momentum lags. Instead, the episodes focus on arcs for the minor characters—not just the above team members, but new ones that Ye Qiu brings on board to round things out. I enjoyed these a lot, along with the themes their stories brought to the fore—like ageing players who still love the game, but who can’t quite perform at the level of the pros anymore; young players who are over-eager to prove themselves; hot-headed players who can talk smack and yet who can’t quite deliver.

Indeed, the recurring ideas of perfectionism, how to deal with failure and loss of face was a powerful one: this drama takes place in an Asian culture, after all, and I wondered in particular how these ideas would have been received. I found it refreshing to see characters fail, and then recover and build resilience. I also found it heart-warming watching team members band together and support one another, instead of tearing each other down. Sure, there was an element of cliché in all these sports movie tropes, but the writers certainly executed them well, in my opinion; I loved them all.

Act 3 see Ye Qiu and his motley crew enter the Glory Challengers League. They’re the underdogs (and who doesn’t like to root for an underdog?!), and in some ways, you’d expect the ending to be a foregone conclusion. But (and I hope this isn’t a spoiler) The King’s Avatar leaves you hanging right up until the very end. Indeed, its ending was one of the things I admired about it, because it felt earned. But I won’t say much more about it.

Final thing: the game play for Glory is not like Love O2O, where characters played themselves in a live action bad CGI version of the game; instead, it’s all computer animated with the quality of something like Final Fantasy: The Spirits Within—i.e. not great, but also, perhaps, what you’d expect of a MMORPG. (I wouldn’t know, though; I don’t play them.) That said, the character design of the avatars matches their real-life counterparts rather well, in my humble opinion. And thankfully, the game scenes aren’t shot like a MMORPG: they’re shot like movies, with camera angles and shots that take in the game’s gorgeous landscape and production design as much as they capture the frenzy and excitement of the battle scenes. (This being an Asian drama, martial arts is still a big thing, even in computer game form.) I normally watch Asian dramas at 1.5x speed, but for The King’s Avatar, I slowed it down to normal just so I could take in every move of the fight choreography. Furthermore, the action was never gratuitous: each in-game scene was there for a reason, furthering the story or our understanding of a particular character.

Right. I think I’ve raved enough. If you enjoy esports, sports movies, MMORPGs or even fun character writing, give this one a try.

(Also, according to this Wikipedia entry, there’s a second series of this live action drama in the works. Yay!)

Every Victorian novel should come with a set of fabric samples bound in at the back. Then when we read about worsted or crape or cambric or bombazeen we could flip to the textile glossary, run our eyes and hands over a little swatch, and actually grasp the textures of that world.

Currently running on about 3.5 hours of sleep and it is as ugly as you're picturing.

As of now we're at 184 agents who aren't subbing new work to HC in support of @hcpunion! https://t.co/6FUyuuxqN0

In hard times, people don't want to be told to look on the bright side. They want to know you're on their side.

The best way to support others is not to cheer them up. It's to show up.

Okay, I will tell this story again because it's very meaningful to me and it's been a long time since I told it last.

This is why I can't write Howard The Duck.

@GailSimone I must say I agree with you, Steve Gerber was my hero in terms of writing comics. If it were up to me I'd leave Howard alone and just re-read his issues and be satisfied at that. To qualify my statement - IF Marvel doesn't leave him alone, you'd be the one I'd trust with him.