View cart “Monsters” has been added to your cart.

In the land beneath the Southern Cross, a tide of rising danger threatens the nation’s people, no matter what mainland or external territory of Australia they inhabit.

Bizarre, violent attacks against the mind, body and soul of the country are carried out, and disaster might only be prevented if six brave women and six brave men stand fast against the chaos.

So it is that 12 superhumans find themselves squared off against a dozen menaces of sinister motive and prodigious power.

But will the SuperAustralians be able to hold the line—especially when there is an evil intent at work they not even suspect exists?

Conceived of and edited by Christopher Sequeira and featuring the work of 26 of Australia’s best comic book artists and writers:

A production of TFGW Publishing and Black House comics.

Moving house and COVID have disrupted my normal ro

Here is how I spent some of my Christmas money. Lo

Trying to write, but am feeling stupidly distracte

The last #knitting project I will ever block on th

Still lots to do at home, but I am stubbornly igno

Feeling a bit resentful this morning that I’m on

Last week due to various things, I got zero writin

Lunch. The pink drink is a dragon fruit smoothie

So. Much. Baking. #cupcakes #Basque_cheesecake # 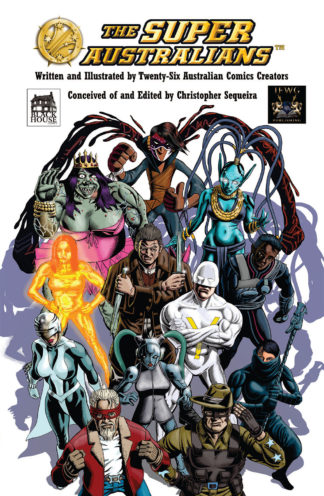