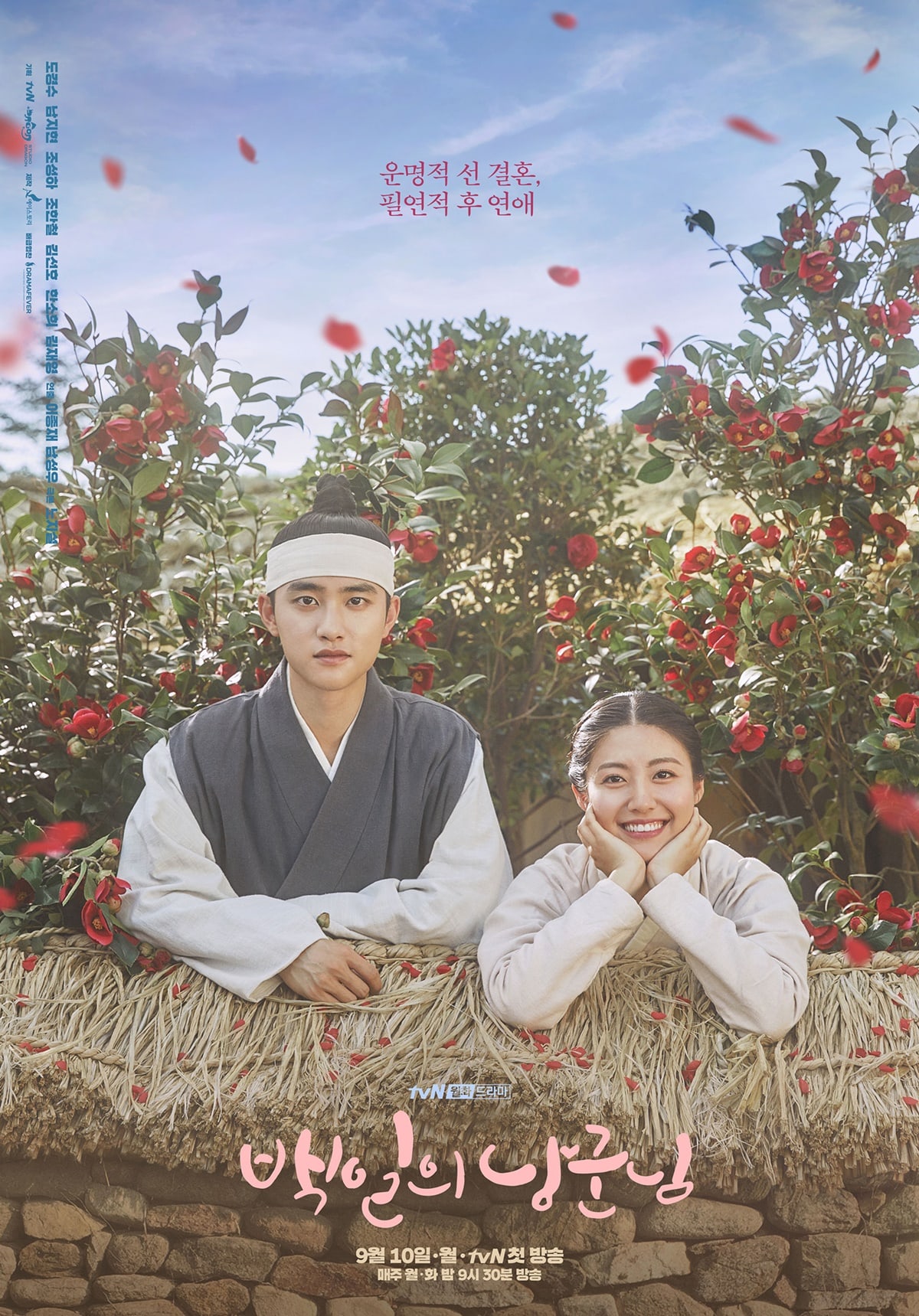 Life has been super crazy lately, but I haven’t forgotten my desire to review the third Joseon-era K-drama I’ve been watching lately (the first two being Moon Embracing the Sun and Love in the Moonlight, though perhaps I should also be counting The King’s Affection).

Like the dramas I’ve mentioned above, 100 Days My Prince (also known as Hundred-Day Husband) has a lot of the same roles. There is a King, but he is a shady character who stole the throne from his brother and whose first wife died as a result of the usurpation. There is a Queen—the King’s second wife—who has a son by the King and who is keen for that son to become Crown Prince, so she schemes behind the scenes. There is a Crown Prince (Lee Yul), but he is cold and resents his father for what he did, blaming him for the deaths of both his mother (the King’s first wife) and his first true love (more about her later). There is also a Crown Princess who is married to the Crown Prince (though he disdains her and refuses to consummate the marriage) and who also happens to be the daughter of the Prime Minister. And there is a Prime Minister (Prime Minister Kim again), who orchestrated the King’s path to the throne and who holds the entire court in his iron grip.

(Oh, there’s also a bodyguard, childhood friend of the Crown Prince, but he doesn’t have a very significant role and isn’t on screen for that long.)

100 Days My Prince begins when the Crown Prince was a child and was not the Crown Prince: instead, he was just Lee Yul, nephew to the previous king, who preferred to play than study, and who liked to bully the peasant kids around him. But a girl named Yoon Yi Seo intervenes, sticking up for his victims and rebuking him for his behaviour. Struck by her wisdom and compassion, Lee Yul turns over a new leaf and applies himself to his studies, vowing to one day marry Yi Seo.

Unfortunately for the childhood sweethearts, tragedy strikes: in the upheaval that results from Lee Yul’s father seizing the throne, Yi Seo’s father, the general and right-hand man of the previous king, is killed at the hands of Kim Cha Eon (who becomes Prime Minister Kim). Yi Seo and her older brother, Seok Ha, flee and are pursued. Lee Yul’s father ascends as King, his mother is killed (presumably also at the hands of Kim Cha Eon), and Lee Yul himself becomes Crown Prince against his will.

For her part, Yi Seo is now living as a peasant girl named Hong Shim in Songjoo village. She has been adopted by a kind commoner man named Yeon who is a widower, his wife and child having died a while ago. (If you’ve seen Love in the Moonlight, you’ll recognise him as Hong Ra On/Sam Nom’s father.) The night of the coup, Yi Seo was separated from her brother, but because they had promised to wait for each other at this particular bridge at the full moon, every month she makes the trek to the capital to search for him.

It is during one of these pilgrimages that she is spotted by the Crown Prince, who thinks he might be seeing a grown-up Yi Seo. She also comes to the attention of a lowly official and son of a concubine named Jung Jae Yoon, who, despite suffering from prosopagnosia or “face blindness” (which basically means he can’t recognise faces), seems to remember hers and therefore begins to fall for her. (Cue love triangle. You know there has to be one! Also, the prosopagnosia is an important plot point.)

Meanwhile, the Crown Prince is facing pressure from the royal court to consummate his marriage, with many officials suggesting that him doing so will break the terrible drought the country is facing. The Crown Prince is rightly sceptical and decrees that if that’s what it will take to bring rain, all the single people in the kingdom must get married within the month or face the consequences.

Unfortunately this has consequences for Yi Seo/Hong Shim, who is the oldest spinster in her village. The local lecherous nobleman makes her an offer to become his fifth wife, but she turns him down, hoping for another solution.

The King sends the Crown Prince to officiate a ritual for rain, but on the way, he is attacked by assassins and flees, accompanied only by his bodyguard. To keep the Crown Prince safe, the bodyguard switches clothes with him and leads their pursuers away. But the Crown Prince has an accident and ends up wounded and unconscious near Songjoo village.

He is found by Yeon, Yi Seo/Hong Shim’s adoptive father, and nursed back to consciousness. But as he is now suffering from amnesia, Yeon takes the advantage of the situation and tells him that he is actually a young man named Na Won Deuk, who is betrothed to marry Yi Seo/Hong Shim. Thus the two of them save Yi Seo/Hong Shim from getting flogged. Yi Seo/Hong Shim and the Crown Prince/Lee Yul/Na Won Deuk actually get married. But their relationship is far from harmonious, with the Crown Prince proving himself to be a rather useless peasant, landing himself in enormous debt (thanks to his upper class tastes!) with the local money lender not long after the wedding.

Meanwhile, the palace is in an uproar, trying to locate the missing Crown Prince, even though some factions within wish him dead. Jung Jae Yoon is pining for Yi Seo, even as he secretly investigates the Crown Prince’s disappearance and is unexpectedly made governor of Soongjoo Village. And Yi Seo’s older brother, Seok Ha, comes back on the scene—only now he seems to be at the beck and call of Prime Minister Kim …

There’s a lot of things I enjoyed about this drama. I liked the way the plot combines a number of Joseon drama/romance tropes into one coherent storyline: there’s the Prime Minister controlling the court, trying to undermine the king; there’s a romantic lead with amnesia; there are hidden identities; long-lost/childhood lovers are reunited without them realising (also a feature of Moon Embracing the Sun); there’s a marriage of convenience; and there are enemies who become lovers (watching Lee Yul and Yi Seo bicker is very entertaining, as well as instructive about how marriages were supposed to work under Confucianism). I liked that this drama focused on the lives of the peasants and how hard things were for them under the heel of the nobility. (I really felt for Yi Seo, anxious over the financial stress the Crown Prince’s bad decisions cause her family.) The minor characters are delightful and humourous, and do well to portray village and community life where everyone is so reliant on one another. And I liked watching Lee Yul and Yi Seo gradually fall for one another and discover the truth about each other, even as they try to deny their feelings. (There’s also a sly dig at romance novels, with the Crown Prince taking a job copying out works of popular fiction—including a volume titled Fifty Shades of Mr Gray.) Although there are aspects of the main story and the subplots involving some of the minor characters that are grim and tragic, these are balanced by the lighter fare in both the romance storyline and the villagers. Furthermore, justice comes to those who deserve it, the love triangle does not end badly, and the ruse the King pulls that finally brings about the Happily Ever After was, I thought, rather satisfying as it brought aspects of the story full circle.

The one quibble I had with the drama was the final scene: although it hints at the Happily Ever After and tries to tie up everything in a neat bow, I still wanted a little bit more. Unlike Moon Embracing the Sun where we’re given a glimpse of life several years later, 100 Days My Prince just ends. There were a couple of plot arcs and character threads that I felt were unresolved—such that the final episode left me unsatisfied and full of questions. It reminded me a bit of how Eternal Love ends: the lovers are reunited and get their Happily Ever After, but their union is not quite established in community the way it should be—which wouldn’t matter if Lee Yul and Yi Seo were just commoners, but he is the Crown Prince, for goodness’ sake.

I realise this sort of thing might only bother me. But if you happen to watch this one, let me know what you think and whether this annoys you too.