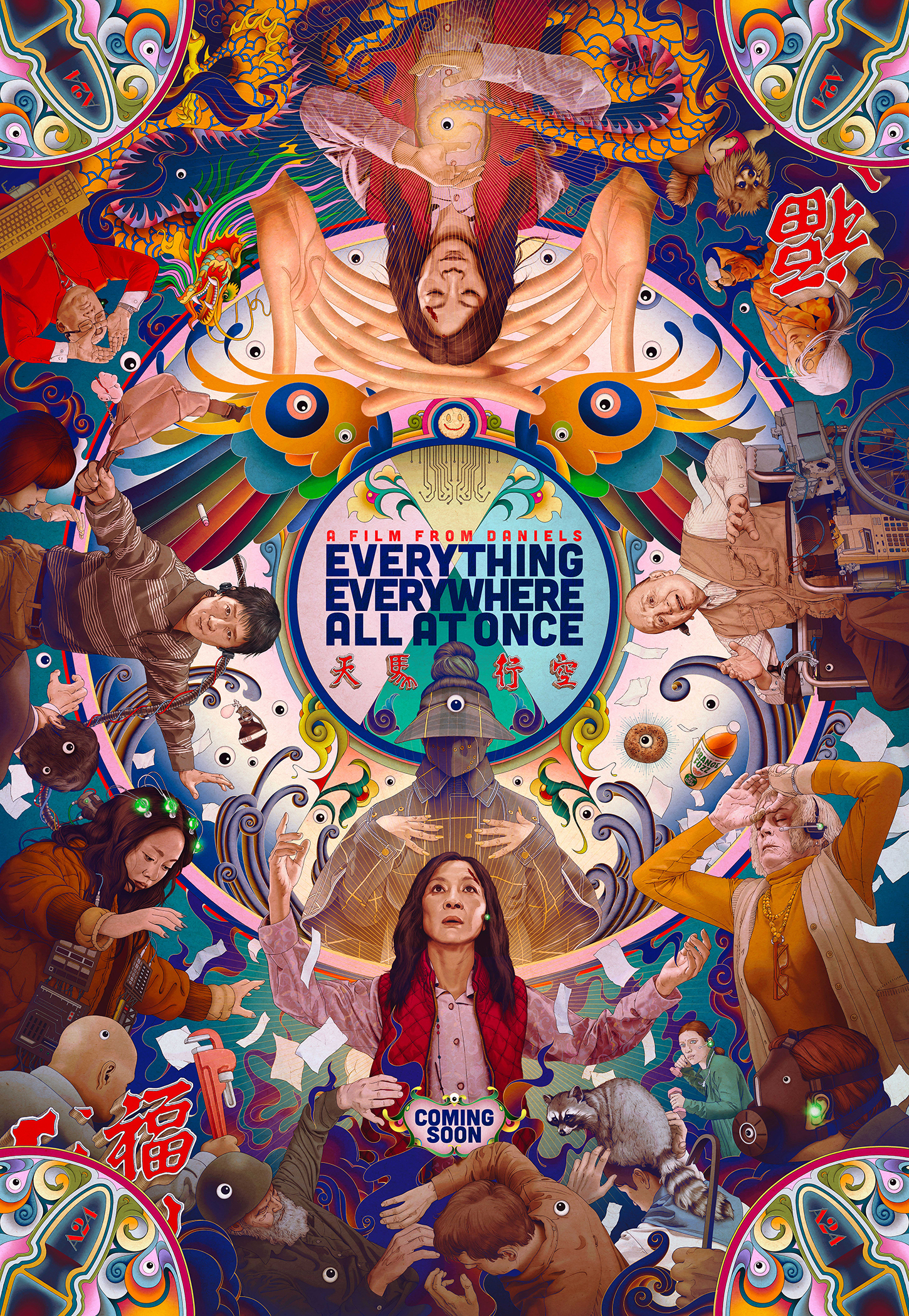 I don’t think I have ever seen a movie as absolutely insane as Everything Everywhere All At Once.

If you were to go to a producer and say, “I want to make a movie with dialogue mostly in Mandarin and broken English about a middle age Chinese woman named Evelyn who gave up everything—including her parents’ acceptance—to migrate to the US with her husband Waymond and run a coin laundry, where they raise their daughter Joy, who is clearly struggling with living as a child of two worlds and who seeks wider acceptance for her relationship with her girlfriend—particularly during the family Chinese New Year celebration, when Evelyn’s super traditional and rather frail father has come to stay, but of course, this is happening at the same time as Evelyn and Waymond are being audited by the IRS, plus Waymond is filing for divorce and trying to talk to Evelyn about it, and then Evelyn gets drawn into a crusade by the Alpha universe to save the multiverse from the evil schemes of a shadowy figure named Jobu Tupaki, who looks suspiciously like Joy and who wants to destroy it all—and by the way, there’s a universe where everyone has sausages for fingers, as well as a universe where no life evolved, though there are a couple of talking rocks, and also, could we get some googly eyes?”, I reckon no movie producer in their right mind would ever have wanted to make this film.

And yet somehow, the Daniels (Daniel Kwan and Daniel Scheinert) got it made and it is BRILLIANT.

First of all, the cast is phenomenal. Michelle Yeoh makes the seamless transition from down-on-her-luck so-very-Chinese-in-only-the-way-Chinese-mums-can-be Evelyn to absolutely awesome take-the-room-apart kung fu master of the multiverse. Stephanie Hsu matches her as Joy, undergoing more over-the-top costumes changes than a Lady Gaga concert. The one who blew me away the most, though, was Ke Huy Quan as Waymond, making the leap from mild-mannered/painfully submissive and pathetic Waymond to take-charge/swoon-worthy Alpha Waymond sometimes multiple times within the one scene. (Special mention should be made of Harry Shum Jr, whose scenes could have easily ended up on the cutting room floor but were among the most enjoyable, even as they were crazy. SO CRAZY!)

Second of all, although the film is a high-concept save-the-multiverse science fiction action adventure, it is also a rumination on the roads less travelled and the choices that make us who we are AS WELL AS being a smaller drama about one particular family struggling with their own very particular problems that span generations, encompass cultural issues and are characteristic of the Chinese American migrant experience, where east clashes with west. If that sounds like a lot, it is. And yet the script never loses the details, it never simplifies the issues, and it never lets go of the tension, even in the midst of the more ridiculous scenes that had me in absolute stitches, gasping for air. In the hands of other directors, things could have easily spun out of control, leaving the audience lost. Not here: you know exactly what’s going on at all times, even during scenes that cut rapidly back and forth with other scenes—other universes.

Thirdly and finally, although there is a lot of violence and some amazing martial arts on display, the way the plot is resolved is as unexpected as it is beautiful, tying together everything I’ve just talked about—the science fiction elements to do with saving the multiverse, Evelyn’s feelings about her life and where she has come to be at this point in it, and even the conflicts in the core relationships between the principle characters. “Everything Everywhere All at Once” comes together in a neat bow that is both emotionally satisfying and hugely poignant. I couldn’t have asked for more.

all of my tea studies made with pixel art ✨