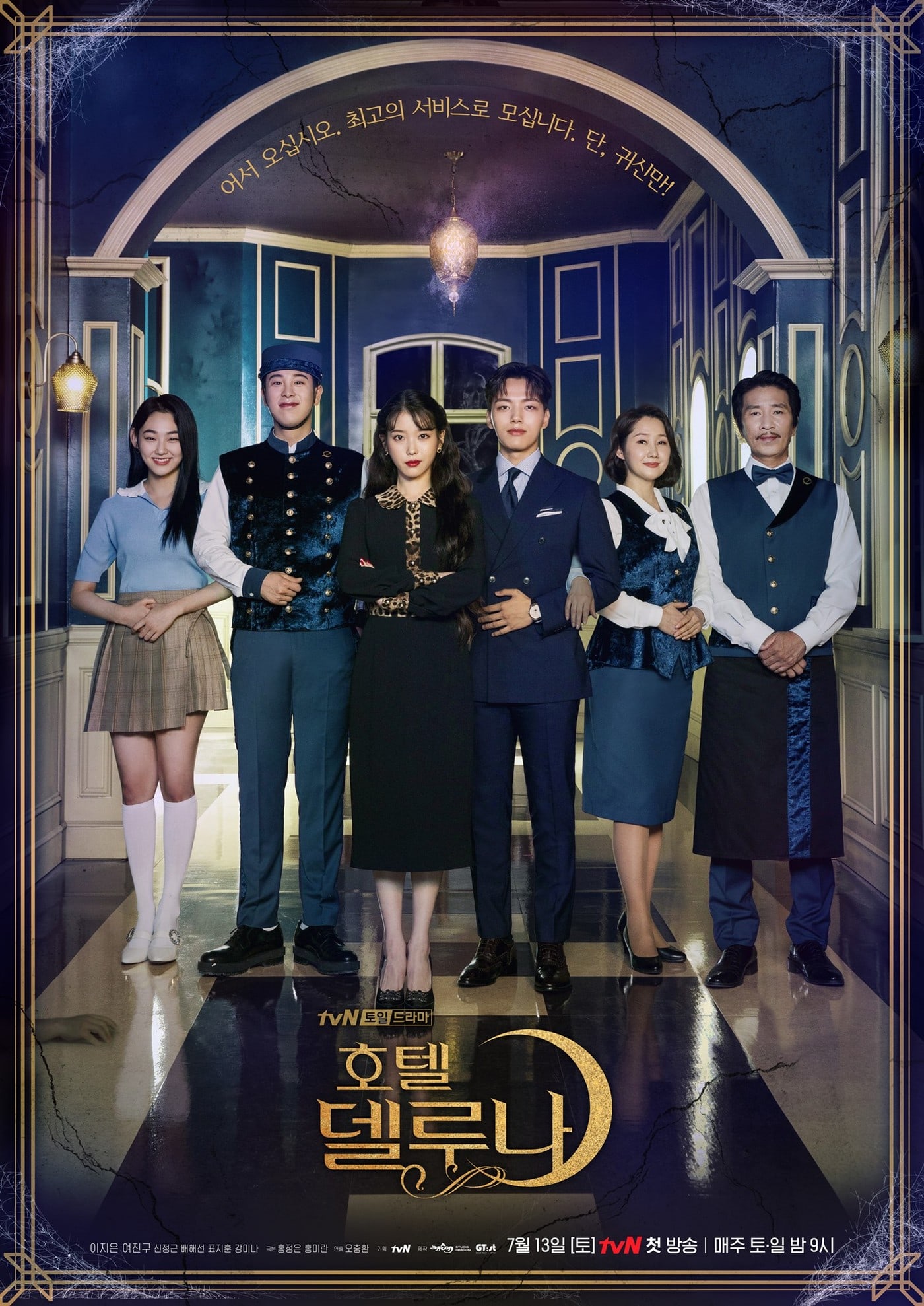 I’m distracting myself from the current COVID mess and the associated anxiety it’s causing me by writing another review of a recently completed K-drama.

Hotel Del Luna kept coming up in my Netflix recommendations, but it wasn’t until a friend recommended it that I decided to start watching. One thing that continues to impress me about K-dramas is the way they’re able to mix genres almost seamlessly, and this one somehow manages to have a bit of everything. The main story arc revolves around a girl named Jang Man Wol who, I think (with my very poor knowledge of Korean history) was born during the North-South states/later Three Kingdoms period when China’s influence on the country was a lot stronger. In the opening scenes, we see her leading a horse and cart bearing a coffin-like box through the wilderness, fending off bandits that dare to attack her. She says she’s looking for the “Guest House of the Moon”—an inn for ghosts before they pass on to the afterlife—and it’s hinted that she’s done some things in her past that she’s not proud of. She meets an old woman called Mago who isn’t quite who she seems, and when Mago points her in the direction of the guest house, she finds herself bound to an ancient tree and in the role of  the new proprieter of the Guest House of the Moon.

Fast forward almost 1300 years. The Guest House of the Moon is now called Hotel Del Luna, and it can’t be seen by ordinary mortals. A little boy named Goo Chan Seong lives with his father, a single dad who’s down on his luck and who strives to make ends meet by engaging in shady activities. It’s Chan Seong’s birthday and his dad wants to get him something nice. But Chan Seong, knowing his father’s situation, just tells him to get him flowers because he likes flowers. “You can even pick flowers for free,” he says. The father bears that in mind. But later that evening, he tries to steal something and ends up on the run, and then somehow ends up at Hotel Del Luna, where he decides to hide out until the coast is clear. While exploring the amazing hotel (which has its own private beach plus a fancy rooftop bar with a spectacular view of Seoul), he stumbles into the garden, finds Man Wol’s tree and plucks some of its flowers. In a Beauty and the Beast-type occurrence, Man Wol appears at that moment and says she will have to kill him. Falling to his knees, the father begs her to spare his life because of his son, Chan Seong. Man Wol agrees—on the condition that he give her Chan Seong. But not now; later, when he’s older. Faced with little choice, the father agrees, and Man Wol, wanting to make sure her investment turns out well, transfers money into the father’s bank account to pay for Chan Seong’s needs.

Fast forward another 20 years. Chan Seong, who has been studying and living in America, returns to Korea with a degree in hospitality and an MBA from Harvard. He was warned by his father to stay out of Korea for 20 years, and now that that period is over, he’s back and keen to work for one of Seoul’s most prestigious hotel chains. But on his birthday, as with previous birthdays, he receives flowers from Man Wol—this time, with a card congratulating him on his employment with Hotel Del Luna. Chan Seong isn’t happy about this as he’s already obtained a job elsewhere. But Man Wol shows up to persuade him. When he continues to refuse her, she gives him the gift of being able to see ghosts—a gift which, unlike flowers, he is unable to give back. And then over time, Chan Seong finds himself starting to care very much for the prickly Man Wol.

Unlike most of the K-dramas I’ve watched in the past, this one operates more like procedural drama: there’s the overarching series arc (Man Wol’s story: gradually we learn more and more about what happened to her); there are smaller stories contained within each episode that involve various ghosts—some of whom become guests at the hotel; and there are slightly longer storylines that span multiple episodes that involve secondary members of the cast—like the three primary employees of Hotel Del Luna, a teenage girl named Yu Na (who has her own complicated story), and Chan Seong’s housemates and college friends. The series contains elements of mystery/crime, horror (because, you know, dead people. Also, I think The Ring is referenced at one point), fairy tale, fantasy and, of course, romance.

Ji Eun Lee (also known, in the K-pop industry, as IU) is fantastic as Man Wol, bringing out the various nuances of her character—particularly in the flash back scenes where she’s playing a much younger and more vulnerable version of Man Wol. I’m not sure if the spiky, difficult female lead is a trope in K-dramas (I haven’t watched enough of them), but aspects of her character reminded me very strongly of Go Moon Young in It’s Okay Not to be Okay. (Her wardrobe is also just as fantastic.) In contrast, Yeo Jin Gu is super sweet as the soft-hearted Goo Chan Seong, and I will never tire of watching leading men being nice to their leading ladies, even when said leading lady is being a total bitch. I also liked that Chan Seong’s character is not afraid to be vulnerable (from my limited viewing, it seems more normal for the male characters Asian dramas to cry on screen; I can’t recall that many scenes in western dramas where that happens)—and he even embraces situations that have the potential to hurt him simply because it’s the right thing to do. Together, they are arguably among the best-looking couples on screen.

The minor characters were also delightful. Their role was often to provide comic relief, but I liked that each of them had very weighty character arcs that caused them grapple with the big themes of the drama. (I just wish the bartender’s—Kim Seon Bi—had been foreshadowed and drawn out a little better; it pretty much gets crammed in at the end and it didn’t make as much sense as some of the others.) Indeed, one of the things I really liked about Hotel Del Luna was watching characters having to confront the anger, resentment and grudges they’d been holding onto for so long (for centuries, for some) and learning to let them go—and then in letting go, finding peace. That’s not a topic I’ve seen tackled very often on television.

All of this was made all the more poignant because of the shadow of death, which stretches long over the entire series. The worldview of Hotel Del Luna is one of reincarnation—to something better if you have lived a worthy life, or something worse if you have not—and reincarnation is something of a plot point involving some of the secondary characters. But even though reincarnation is this world’s reality and death is not really the end, the characters still struggle with the awfulness and finality of death, and have trouble letting go of life, even if they have not truly lived in hundreds of years. There were points where I empathised so strongly with them, I found myself in tears.

Even though the ending hints at a second series (and there’s a definite link to It’s Okay Not to be Okay that I won’t spoil), nothing has been confirmed. If there was a second season, it would be interesting to see the writers take the stories in new directions. But so much terrain has been covered in this one, it’s hard for me to see where they would go with it. Still, I think I’d still watch it—if only for the lead actor.