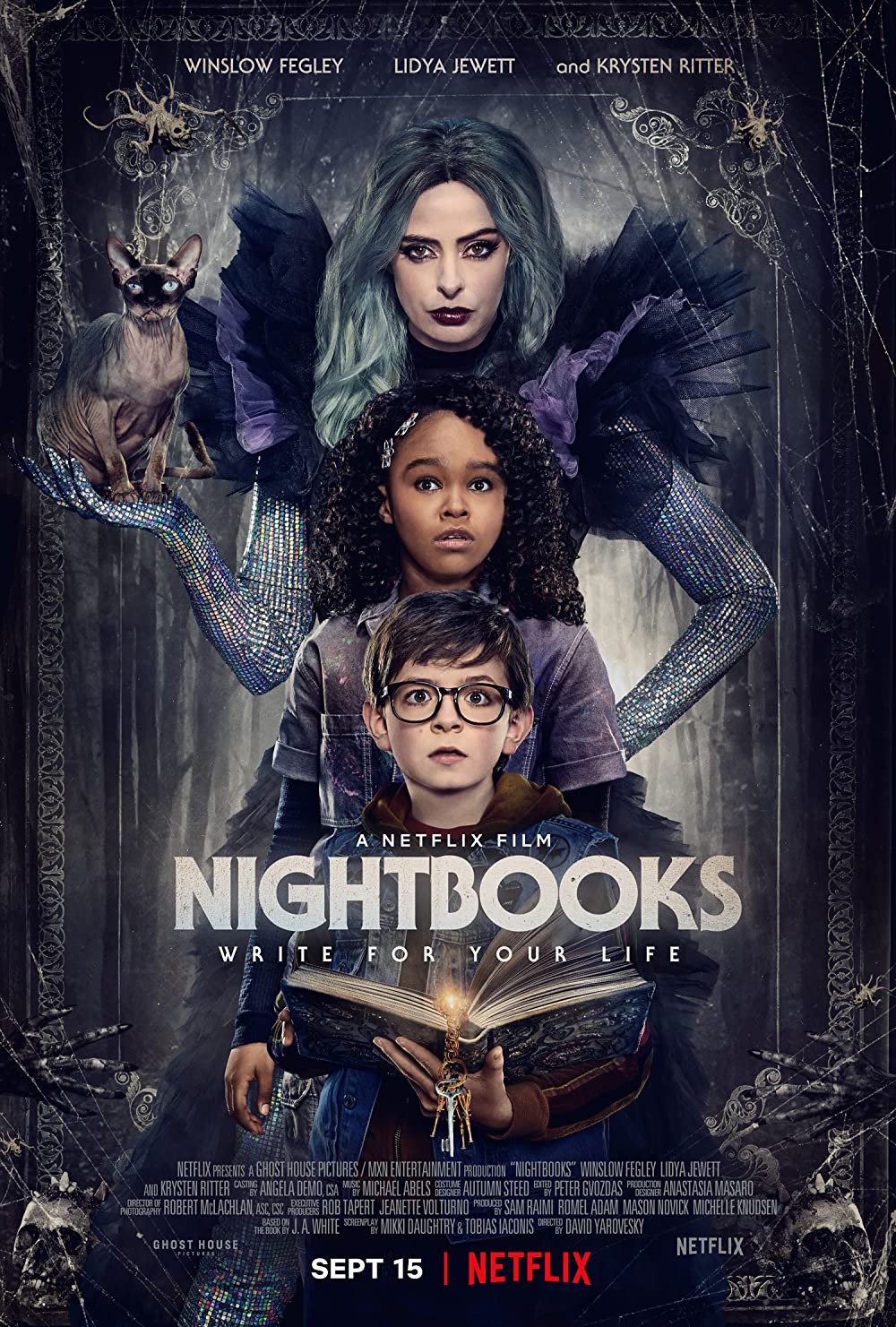 The creep factor is present from the very beginning of this movie: it is, of course, a dark and stormy night, and 10? 12?-year-old Alex is upset and raging, tearing down posters of shlocky horror films from the 1980s and screaming about how he wants to burn it all. His parents are having an argument about him and some trauma that he’s recently endured. Clearly, they’re worried about him. He runs out of their apartment and into the lift, intending to set his books alight in the building’s boiler room. But instead, with a slice of pumpkin pie and an unattended television screening The Lost Boys, he is ensnared by a beautiful witch named Natacha (played by Krysten Ritter, who looks like she’s having way too much fun) and forced to prove his usefulness to her by reading her a new scary story every night.

Alex is not the only child that Natacha has ensnared: her creepy granny kitsch apartment also houses Yasmin, a girl about Alex’s age who cooks and cleans for Natacha, and a hairless spiteful cat named Lenore, who acts like a spy for the witch and who likes to turn invisible. At first, both Yasmin and Lenore are hostile to Alex. But shared adversity forges powerful bonds, and soon Alex and Yasmin are plotting together to find ways to escape.

I haven’t watched or read that much middle grade horror (Stranger Things and Monster House is about the extent of it), and horror really isn’t my genre. Nevertheless, I quite enjoyed this one—perhaps because it was consciously steeped in fairy tales (Hansel and Gretel references abound) and 80s horror tropes. It was fun seeing Alex read his stories (which were dramatised in a heavily stylised way that I thought befit the tale-within-a-tale thing they were going for) and having to endure the world’s worst writing critique group in the form of an impatient, nitpicky and exacting Natacha. (“Writers. Always so insecure.” *Cue snarky giggles from me.*) The way his writers block was depicted made me laugh while, at the same time, I kept yelling at the screen for him to go take a walk or read some of the many tomes that comprised the library he was forced to work in. (Indeed, give it’s Week #15 of lockdown, I rather envied the fact that he had TIME and SPACE to write—time and space UNINTERRUPTED, at that!) It was also very emotionally satisfying seeing him and Yasmin slowly begin to connect, and I enjoyed the spark of cleverness Alex displayed in trying to trick the witch into revealing some key piece of information. The jump scares were a little cheesy, bordering on predictable. But this is a kids movie, and perhaps some leniency is in order.

Indeed, I wondered how much my viewing the film as an adult was colouring my perceptions of the film. There were points at which I felt that the kids were being a bit slow or a bit stupid—that they should have acted and done certain things to help themselves, or done certain things sooner. I wondered how a kid would have found it and whether they would have empathised with the main characters’ paralysis and indecision. In particular, I wonder how they would have responded to the big reveal, when Alex finally answers Natacha’s question about why he was so keen to burn his writing (which he has scribbled in journals he calls his “Nightbooks”). For me, I felt like this could have been seeded better and earlier so that the emotional weight of Alex’s trauma could have hit harder.

Indeed, in spite of some pretty decent pacing, some of the plot twists and character arcs felt a bit predictable (even though I liked some of them), and if you think too hard about the story and its world building, you’ll come across some curious holes. (That said, and given that the movie is based on a book of the same name by JA White [which I have not read], I wondered if the movie would have worked better as a miniseries, with more time and space to allow the stories—and back stories—to breathe a little more.)

Final thing: the production design on this movie is gorgeously nightmarish—from the William Morris wallpaper to the antique porcelain dolls to the cobwebbed spiral staircased library, and even a gingerbread house that looks both mouthwatering, yet sweetly and sickly gross. Natacha’s wardrobe is also fabulously retro and over-the-top, with iridescent fabrics, sequins for days and eye-wateringly high platforms galore. The score was comprised of some rather over-used high strings. But I really like the CHVRCHES cover of “Cry Little Sister” (which comes from The Lost Boys): not only are they one of my most favourite bands, I felt that fit really well with CHVRCHES’ aesthetic.

If you and/or your kids like creepy stories, this one’s for you—and just in time for Halloween.