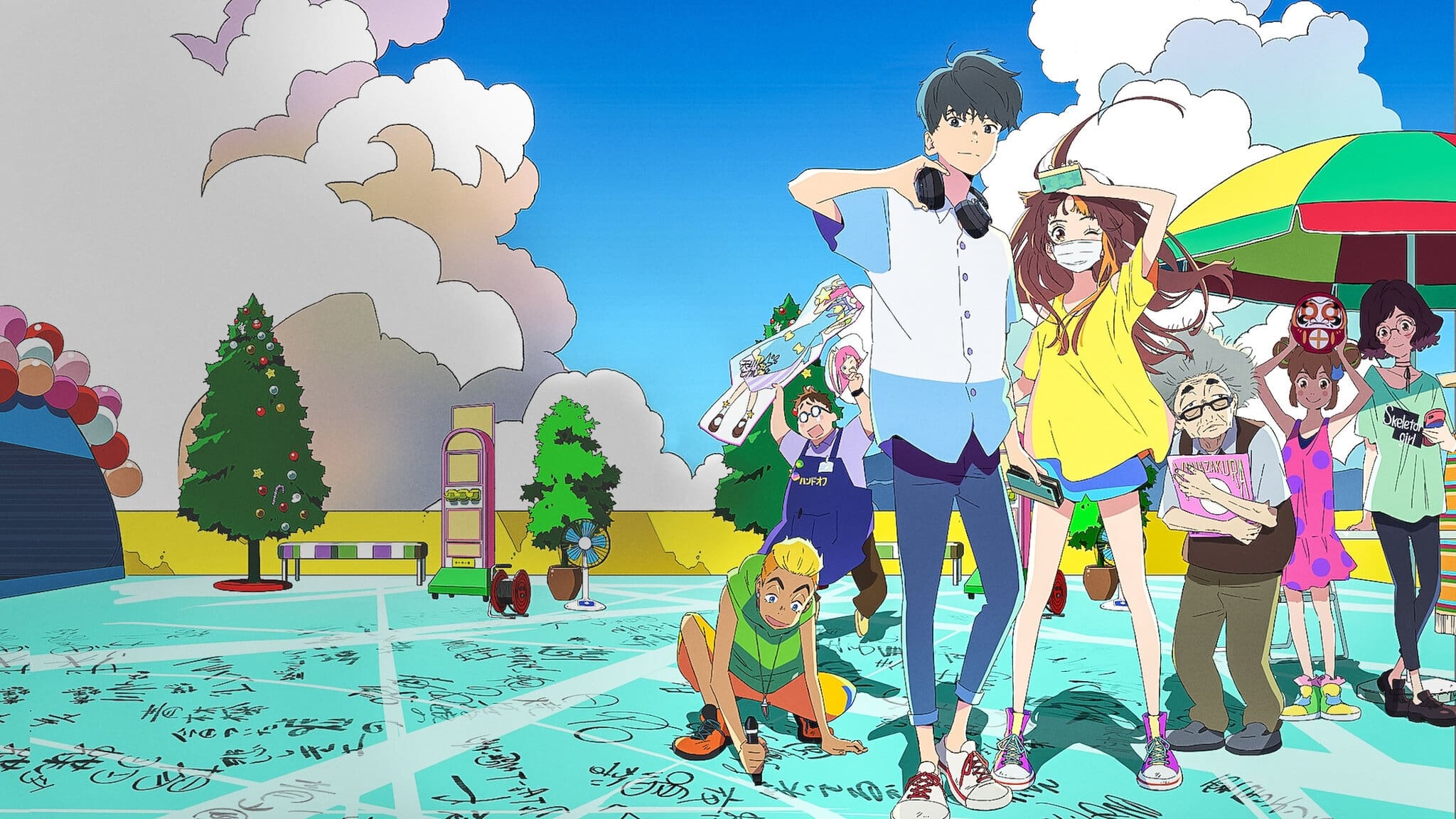 It’s the beginning of summer. Yuki (or “Smile”) is a teenage social media influencer with buck teeth that she is getting corrected with braces—only she doesn’t like her braces and seeks to hide them behind face masks (in this anime world that COVID hasn’t touched). Yui, otherwise known as “Cherry” because of his last name (“Sakura”), is a shy and retiring teenage haiku writer who is filling in for his mother at the elder care community centre of the local shopping mall and who seems to have some sort of sensory processing disorder as he shuts out most of the world by wearing over ear headphones that don’t actually play music. By chance, they literally bump into each other at the aforementioned mall and accidentally swap phones.

Tangled up in all of this is one of the seniors who attends elder care, Mr Fujiyama, who constantly carries around a record sleeve emblazoned with the word Yamazakura across the front. He’s looking for the disc that used to be in that sleeve, and the mystery behind it serves to bring Smile and Cherry closer together. Meanwhile, the Daruma festival approaches.

There were a lot of things I liked about this: it’s a gentle and simple story, but I liked the nuances given to each of the characters that made them feel less two-dimensional. I liked how Cherry’s haikus popped up as graffiti all over the place (thanks to his friend Beaver, who was using them to practise writing in Japanese), and how the scenes and the story gave his poetry an added weight and meaning. “Haikus help me express things in words better”, he says a third of the way through the film, which means they open up additional insight into what his character is thinking and feeling. Smile could have just come across as a ditzy, too self-conscious and shallow bimbo, but there was also a shyness, a sadness and an anxiety to her that made her relatable. Even though Smile and Cherry are quite different, they shared a lot of similarities, and I liked how often they were portrayed in parallel, their bodies mimicking each other. The other thing that struck me was their relationship with their phones (perhaps because I’m old!): their devices were a near-constant part of their lives and, perhaps, their identities, and much of the movie was mediated through those small screens.

The other thing I liked was the layers of culture and history that the script wove on top of such a simple story—not just in Mr Fujiyama’s past, but also in the history of the shopping mall, Cherry’s haikus, the meanings bound up in the words he looks up in his saijiki (a dictionary or almanac of seasonal terms used in haiku), and even the Daruma festival and its related paraphernalia. (Daruma dolls abounded throughout this film: from what I can gather, they symbolise good luck, but they also encourage people to strive for their goals: they’re sold with blank eyes, and the idea is that you fill in one eye when you’ve landed on your objective, and you fill in the other eye when you’ve achieved it.)

The animation was quite different to what I’ve been used to seeing in other anime like The Girl Who Leapt Through Time, Your Name and even Studio Ghibli fare: the lines seemed sketchier and less defined; the colours were flatter, brighter and oversaturated; and the movement in some of the action scenes was more dynamic and crazier. I rather liked it and thought it suited the summer/candyland aesthetic the filmmakers were going for.

The ending was sweet and felt earned, though there were still some questions left up in the air that made it feel less resolved. But overall, I enjoyed this one as a light bit of fun and recommend it as a nice escape from lockdown.