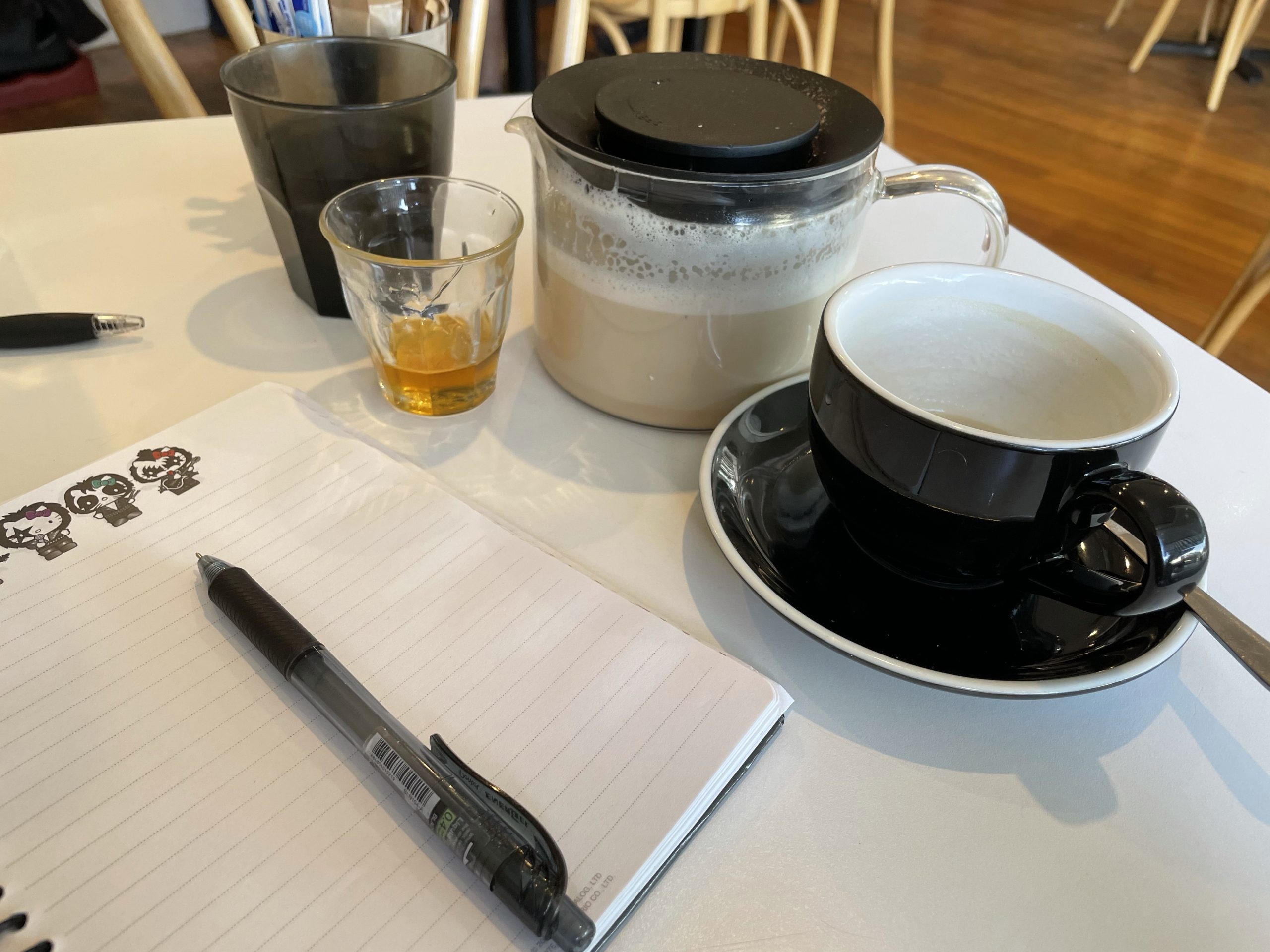 This is how I used to write before the pandemic: I organised my part-time job and my life so that I had very set writing mornings—Tuesdays, Thursdays and Saturdays.

Depending on the day, I would walk the girls to school for drop-off, go to a local café, and write and have a hot drink in the half hour before the library opened, then move to the library where, if I was lucky, I got my favourite desk. If I left it too late, my favourite desk was snapped up by an elderly Chinese man who liked to read the papers and mumble very loudly under his breath while reading. He’d stay until baby rhyme time began—during which I would be surrounded by parents and infants and would be trying to drown out the librarian who couldn’t sing in tune with very loud music piped through my headphones.

After baby rhyme time, I would continue writing and often try to stave off hunger pains/the need to go to the loo (as the library one was terrible as they shared it with the food establishments around it and you needed to ask them for a key). Then I’d walk home when I couldn’t leave it any longer, often still thinking about my novel.

Or some mornings, I’d go do my gym class and then sit for a couple of hours with my laptop in the food court of the shopping mall above the gym while people came and went around me.

Doing this, I managed to clock eight to ten hours of writing a week.

Of course, COVID changed all that. During lockdown, I couldn’t go to cafés or libraries or food courts. I tried to make do with my little desk—or even my balcony while the weather was warm. But I usually couldn’t manage more than half an hour to an hour, and that was on days when Ben was able to take the girls out for exercise.

I expected that: we were all going through a hard time after all, and sharing a two bedroom flat with three others who needed to do home learning as well as paid work was stressful enough. I purposefully kept the bar low.

But then things began to open up again and we were allowed back into cafés and food courts (though not always libraries). I’d go occasionally, but I was more aware of the risks (even when masked). It was safer not to risk mingling germs with others.

And then we moved out of our two bedroom flat into a house—a house where, for the very first time, I got to have my very own a study. With a door. (It’s not a lockable door, but it’s a door! And if I really wanted, I suppose I could pay someone to put a lock on it, but a Do Not Disturb sign would probably do just as well if I could be bothered.)

But even with a study, I’m not being as productive as I was pre-pandemic. It’s easier to write when I’m not at home, away from the distractions of housework, parenting and the endless To Do list. The pandemic isn’t over, and while public health guidelines regarding masks and indoor spaces are still in flux (particularly at the moment), I’m still not completely comfortable with resuming my old writing haunts.

I’ve tried to set up my study so that it will work for writing: I have the two desks (one for writing; one for the paid job, and they face different directions). But I wonder if doing my writing in the same space as my work is having a detrimental effect. (I say this while being very conscious of how spoiled I am.)

It’s just that often I find myself doing a lot of trying to write and not actually writing.

Writing (or rather, not writing)

Part of it is my perfectionism: I have been known to spend hours and hours agonising over how to craft the right sentences and paragraphs for dialogue and description. Transitions are often a huge problem for me as it isn’t always clear how to move naturally from point A to point B in a scene. In addition, I am always falling down research wormholes, because my novel is set in a fantasy version of Edo-era Japan (which I did because one, I LOVE Edo-era Japan, but also two, it’s an exercise in world-building; there’s nothing like modelling your setting on a real historical period to make you curious about why things were done the way they were. Which reminds me, I should write some novel research posts sometime …)

After a couple of months of near-zero productivity, I decided I needed to change my approach. I’d been listening to Antony Johnston’s Writing and Breathing podcast (in which Antony Johnston interviews writers of different backgrounds and mediums about their origin story and their process) and several authors talked about how they wrote like 3D printers, building up a scene one layer at a time. Some would start with the dialogue, then add the dialogue tags (“he said, she said,“ etc.), then the action, then the setting/description, plot stuff, etc.

It reminded me a lot of a conversation I had with Louie Joyce at the last Australian Comic Arts Festival: I had been talking to him about making the switch from comics to prose, and how sometimes it helped to write what writers often call a “zero draft” first—a word sketch of a scene that might include bits of dialogue and action, but also the main point of the scene and the central conflict and any other important bits. Louie compared the zero draft to the thumbnailing stage in comics—when you’re sketching out how characters should look, how the story should be told in panels and what shots to use. He pointed out you’re often making key creative decisions and doing the bulk of the creative “work” in this phase, as when it comes to inking, colouring and lettering, the most important work has already been done—even at this stage when everything is still rough and raw.

I liked that analogy immediately and it helped change the way I thought about writing. It sounds obvious, but I fell into the trap of thinking that not all writing is “writing”. That is, “writing” does not simply consist of putting pen to paper or fingers to keyboard; “writing” also encapsulates the thinking and the scribbling and the sudden burst of inspiration you get when you’re on the loo and you have to race to capture it before you forget. “Writing” means the toiling and the crafting of sentences and tearing out your hair while you search for that elusive perfect word. And “writing” is the redrafting and the reshaping and the reworking you do in response to feedback as you whittle away the thing, trying to get it as good as you can make it.

(Related to the zero draft/thumbnailing/writing being difficult thing: recently I stumbled across the excerpt from an interview with John Swartzwelder, who used to be a lead writer on The Simpsons:

I do have a trick that makes things easier for me. Since writing is very hard and rewriting is comparatively easy and rather fun, I always write my scripts all the way through as fast as I can, the first day, if possible, putting in crap jokes and pattern dialogue—“Homer, I don’t want you to do that.” “Then I won’t do it.” Then the next day, when I get up, the script’s been written. It’s lousy, but it’s a script. The hard part is done. It’s like a crappy little elf has snuck into my office and badly done all my work for me, and then left with a tip of his crappy hat. All I have to do from that point on is fix it. So I’ve taken a very hard job, writing, and turned it into an easy one, rewriting, overnight. I advise all writers to do their scripts and other writing this way. And be sure to send me a small royalty every time you do it. (Source)

Just quietly, I love the concept of a “crappy little elf”!)

My point is, it’s all writing. Why did I think it wasn’t?!

And the point for me was that as my current way of working wasn’t serving me, why not try something different? Why not approach writing prose the way I and my collaborators approach making comics?

The thing with this approach to writing is that there are no helpful metrics by which to measure progress. It’s more impressive to say, “I am now 50,000 words through this project!” compared with, “I’ve just finished sketching out the whole book!” I suppose you could do it a bit like the comics job sheet that Antony Johnston uses and make up your own boxes to tick off.  But that doesn’t quite work for me.

Neither does time: I tracked my hours for a while using Toggl Track (which I use to log my work hours), so that’s how I know I used to write between eight and ten hours a week. Yet I can easily spend a lot of time at my desk, getting sucked into a YouTube research vortex and not actually writing anything.

So how do I measure progress instead? (Well, aside from divorcing my self-esteem from my productivity.)

The answer is I’ve become a little less fixated on it. I am trying to be content with any forward movement, no matter how small. So with my current novel project (which I am calling “The Taika novel project” after the lead character), I’ve outlined the whole thing. I have a chapter by chapter and scene by scene breakdown that I think works (though I won’t know for sure until I write it). It will clock in at about 16 chapters (and hopefully at least 75,000 words, which is about standard for a YA novel). Chapters 1-2 are in early draft form, and have even been workshopped with my writing group. Chapters 3-4 are at zero draft stage. I’m currently working on the zero draft for chapter 5 using Tansy Rayner Roberts’ 100 words per day for 100 days challenge (see From Baby Brain to Writer Brain: Writing through a world of parenting distraction; so far, I’m up to a 42-day streak). It’s all very slow-going.

That’s okay. I keep reminding myself it’s better than nothing. The fact that I am writing anything during this period of creative depression is a small miracle. I’ll go back over it, and go back over it again, 3D printing up and up and up. One day I’ll have a book.